If you are running scheduled Windows batch files, then sometimes it could be more convenient to run batch file minimized.

Here is a simple example of how to schedule batch files in Windows Task Scheduler. But if you want to run it minimized, then you have to make adjustments in the Actions tab.

“^& exit” at the end is necessary to close the CMD window after the batch file is executed. 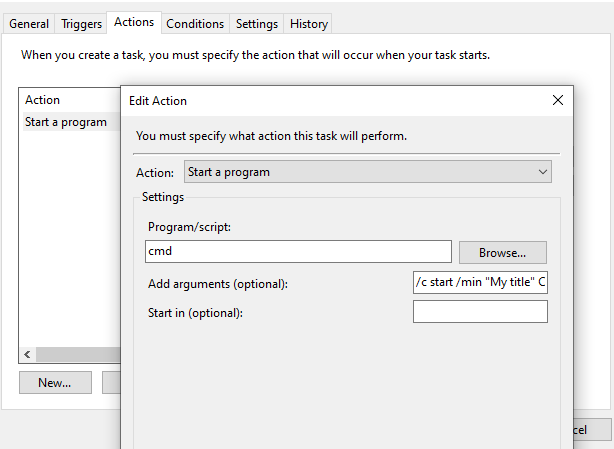 Exit at the end is used to close the current CMD window. Use it only if necessary.
The title is optional. You can also run it like this

If you want to just run batch file and keep doing other things, it is the same as above.

Batch file minimized from itself

If you want to minimize the cmd window after running it, I recommend this post from StackOverflow. Here is an example with a batch file that contains a line with R script execution.

If you want to found out more cool stuff about Windows CMD, take a look at other Datacornering posts about this topic.