For scheduling in Windows, there are classy options like Task Scheduler and running programmes on startup. Also, it worth mention that you can create a loop in a batch file to periodically run some command line commands, R scripts or other programmes that are possible to run in batch mode.

When you are creating a new task in the Task Scheduler go to the Actions tab, create a new action and fill two fields:
1. Program/script – name of the Batch file.
2. Start in (optional) – with a path to Batch file. 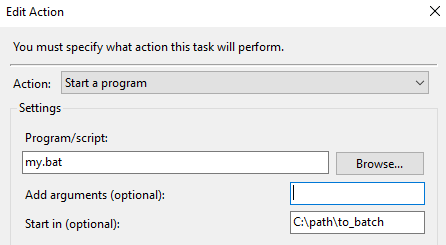 It comes handy especially when your Excel file contains macros that run when opening a workbook. When you are creating a new task in the Task Scheduler go to the Actions tab, create a new action and fill two fields:
1. Program/script – with a path to EXCEL.EXE. If there are spaces in pats quotation marks needed. In my case C:\Program Files (x86)\Microsoft Office\Office16\EXCEL.EXE
2. Add arguments (optional) – with a path to Excel file. In my case C:\Users\somebody\Desktop\OP_INFO_AUTO.xlsm 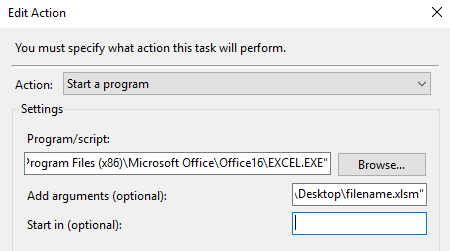 For example, if you need to run a batch file only on Windows startup, then you can use the Startup folder.
1. Create a shortcut to file.
2. Press Windows key+R to launch Run window and type shell:startup to open Startup folder.

3. Move your shortcut to the Startup folder.

Here is an example code with loop and timeout which is needed to have some delay in code execution.
For example, I’m running code after every 60 seconds.

Or R script with a 60-second timeout.

In some way, it is the same as Task Scheduler that periodically runs the necessary code. If you have to figure out something more about timeout functions, what is the meaning of used parameters, then type timeout /? in the command line.

In one of the previous posts, you can see how to run R script from command line and with Task Scheduler or Windows command line loop and timeouts you can run them periodically.

If you need a good command line alternative, then try out PowerShell. There is also very helpful command Sleep that works similarly like Timeout in CMD.